Players are in the Pearl Universe on the plane of Chaldea. Chaldea is Peter Adkison’s home-brew RPG campaign that he’s GM'd since 1980. Over the decades he used a number of game systems but the most common systems he used to GM Chaldea were AD&D (with significant house rules), 3e, 5e, and Burning Wheel.

The old guard who played 0D&D or AD&D back in the late 70's-early 80's will feel right at home in Chaldea. It "feels" like a D&D campaign from that era, with PC races and monsters typical from that era, plus a few unique. Also, the gods are not the gods of Greyhawk or Forgotten Realms; Chaldea was born of Deities & Demigods tradition, using the real-world mythologies--the Norse Gods, the Egyptian Gods, the Chinese Gods, and so on.

Whether it's the races, monsters, or rules, what will also feel familiar is that there are house rules, unique additions, variations, and surprises—thus continuing the sacred tradition of adopting the system to your setting and style.

Within Chaldea, players are based in Somarria 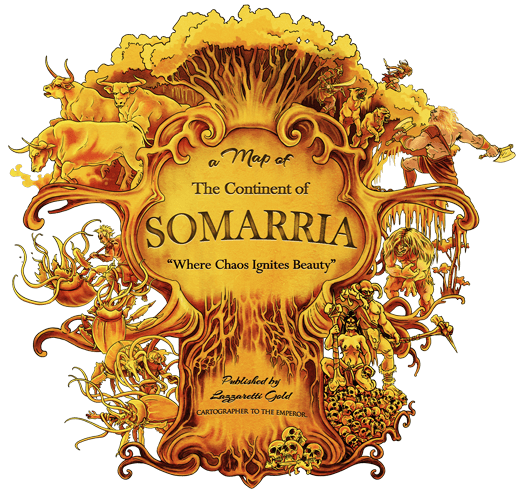 Somarria is the largest continent in Chaldea--and also the least tamed. There are two advanced kingdoms in Somarria: Targonia and Lynnwood. But these two kingdoms represent only about 20% of the continent and players won't be anywhere near either one of them.

Instead, players will be in Arusha, a mostly wilderness kingdom with vast waterways, lakes, plains, forests, and jungles. It's unclear who rules Arusha, if anyone. Tribal clans of humans, orcs, and other humanoids roam the lands, following their own customs for trade, courtship, and war.

Somarrian Hunt players are based out of the port town of Sheol, at the mouth of the Boyonogo River. Sheol is known, (infamously so), throughout Chaldea for Gravers Dig, a nefarious graver’s hang-out attracted there for the dangerous lifestyles and pursuits from across Chaldea. It's essentially an entertainment district known for arena fighting, gambling, vices, and the Somarrian Hunt.