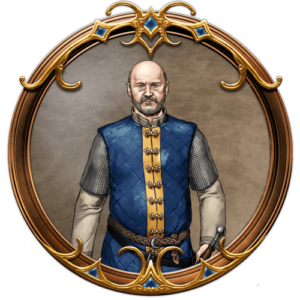 Master Karl von Werner of the Knight Order of Teton is the Master of Montfort, a small keep in the frontier wilderness of Tetonique. Karl has a handful of knights under his command, including Sir Johann Huber. Though Karl is 55 years old, he is still physically fit and a tough combatant. He also possesses a quiet strength and a pragmatic wisdom.

Karl von Werner was born in Year -15 to Master Jan von Werner and Frau Berchte von Werner. At age fourteen, Karl squired under Grand Master Henning von Klein and was knighted at age twenty by Henning into the Knight Order of Teton.

After he met Emma von Becher at a joust hosted by her family in Wark, Karl and Emma began a romantic courtship that culminated in their marriage in Year 9. Their marriage ended tragically less than a year later when Emma died in a fire. Heartbroken, Karl has never remarried. 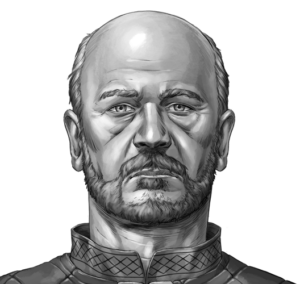 Emma’s untimely death led to a feud with the Beckers, who blamed Karl for Emma’s death. Seeking to ease tensions, his father Jan was sent to Augstat and attached to the Hecks under Hellwig von Gustavus.

Eighteen years later, in Year 28, Jan died, and Karl returned to his family fief, assuming the responsibilities of Master of Montfort.

Scroll Up
In the "Age of Internet", cookies are a thing. This is for our age gate check we don't track anything else.Ok