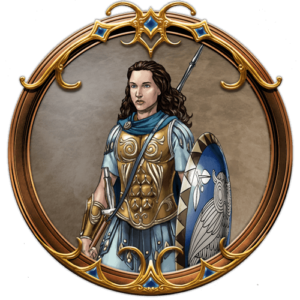 Sofronia is a Mycenaean noble and heir apparent to the Hessen throne.

Sofronia was raised in a luxurious Mycenaean home as the daughter of a prominent noble family. When she was fifteen, she married Euthymius, the Basileus of Delos, one of the numerous island poleis (city-states) of Mycenae. This was not an easy time for Sofronia, as Euthymius was often a violent and temperamental husband.

She was raised knowing of her Hessen mother’s ties to the noble family of Rusdorf, and though she never traveled to Hesse, Sofronia always took pride in this ancestral connection. Perhaps it was this pride that drew her during her teen and early adult years into studies of longsword fighting in the style of Hessen knights.

When she was in her mid-20s, Sofronia’s husband destroyed a pirate haven on the island of Demos, but in retaliation, the pirates had him assassinated. Thus, Sofronia became Basilissa of Delos.

With the help of Stelios, her father’s military advisor, Sofronia defied the pirates who slew her husband. She led raids into the lands of four other island poleis just to obliterate piracy operations throughout the archipelago.

In her war against the pirates, Sofronia gained a reputation for a ruthless sense of justice. At the age of 28, she was summoned before the Wanax of Mycenae, where she defended her actions so passionately that she gained significant public support from the rulers of other city- 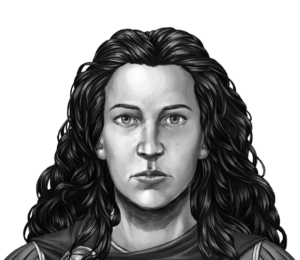 states. Faced with this public support, the Wanax absolved her of any crimes related to the mass executions of pirates.

Immediately after Emperor Kordaava was assassinated, Sofronia publicly declared her worship of the Olympian god Athena. Following this, she began campaigning with other city-state leaders for a vote to allow free worship of Olympian gods throughout Mycenae.