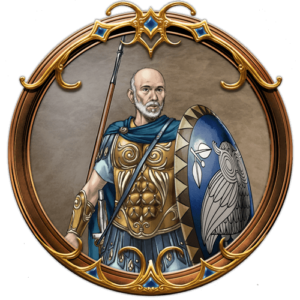 Stelios holds the rank of chiliarch in the Mycenaean hoplites and is the military advisor to Sofronia, heir apparent to the Hessen throne.

Early life. Stelios was raised on a small island north of Melene, located on the northernmost point of Mycenea’s Ionian Archipelago.

At a tender age (probably as young as five or six years old), Stelios was the only survivor of a dramatic shipwreck—a wicked winter storm dashed the hull of the ship his family was aboard on Melene’s infamous Akkrakies islets. He was discovered almost drowned amidst the wreckage by Otago and Eustace, two men who adopted Stelios and raised him as their own son.

Stelios grew up with his two fathers on a small privately owned island north of Melene. Otago was a deep-sea fisherman who taught Stelios the ways of the waters. His other father, Eustace, a retired hoplite, owned and operated a prosperous sheep farm.

At seventeen, Stelios traveled to Argos, the capital of Mycenae, hoping to enter the “Billfish Battle” fishing tournament the city held every year, attracting thousands of anglers. Stelios set to sea and battled a titan fish, but instead of pulling in a prized swordfish, he brought home a whale. News quickly spread of the remarkable fish tale of a young man who single-handedly slew a whale.

Hearing this exciting tale, the soon-to-be Emperor Kordaava postponed his attack on Tavja to take a quick side trek to Argos to see if the rumors were true. While Stelios did not win the fishing tournament, he instead received a much larger prize when Marcosta Kordaava offered the remarkable young man a position at the Cantaburnium war college.

“A young man such as Stelios, who can throw a harpoon well enough to slay a whale, should be in the Legion,” Kordaava said.

Honored by the offer, young Stelios graciously declined and instead asked if he would be permitted to join Mycenea’s military as a hoplite like his father had been. There, he felt he could be of much better use and influence to his people instead of as a minor cog in vast Imperial army.

Professional life. Stelios has enjoyed two careers: the first thirty-year career was as a hoplite in the Mycenaean heavy infantry, as a Hypaspists foot soldier. After receiving the Strategos Gallantry Award for uncovering an assassination plot against the Mycenean royal family, he was given his choice of any command or position he desired. Once again, he chose to serve and requested a station working for his best friend, Euthymius, whom he had served beside in the military. Thus began his second career as a chiliarch military advisor to his family. 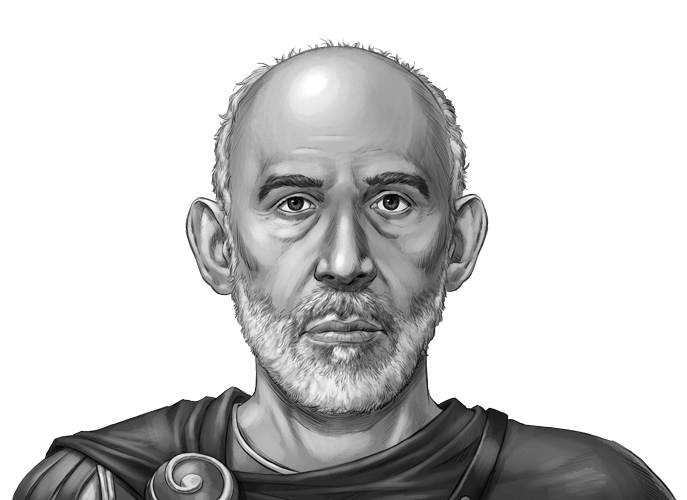 Stelios is portrayed by Victor Pappas