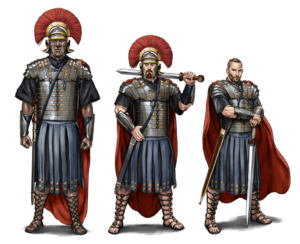 An Imperial legionnaire is a highly disciplined, professionally skilled soldier. While the bulk of the legion’s forces tend to be heavy infantry, a limited number are trained as scouts, skirmishers, artillery experts, and cavalry. Each member is outfitted with a small fortune in high-grade metal weapons, armor, and equipment: clad in steel lorica segmentate (body armor), galea (helmet), scutum (shield), gladius (short sword), pila (javelin), daggers, and leather sandals. They are as equipped for battle as any soldier in all of Chaldea.

The infantry is the backbone and foundation of each legion—most other military operations rely on auxilia units from various kingdoms, such as Ardayan camelry, Ta Shemau charioteers, Roosh horse archers, and Hessen knights, just to name a few.

In order to maintain their status as Chaldea’s elite fighting military, legionnaires train continuously; they become battled hardened and physically fit under a daily regimen of running, marching, and dueling (with heavy arms and personal weapons), performing drill formations, and practicing tactical exercises. Artillery soldiers are trained in the operation of siege weapons across the spectrum, from ballistas to onagers to scorpions.

An army marches on its stomach, and as such, Emperor Kordaava guaranteed every soldier in his military would eat well and often. Thus, the Imperial military is well-provisioned with quality goods and plentiful food. Never going hungry is a powerful recruiting tool for many.

To take advantage of this tool, the Imperial military has a well-organized, industrious recruitment program, through which they heavily recruit young soldiers from all around Chaldea, cherry-picking the best of the best from local militias and militaries. Enticing young talent to join the legion is an easy proposition with the emperor’s personal guarantee of quality pay, equipment, room and board, and assurance they will be surrounded by the best fighters the world can offer—not to mention their emperor and commander is a god.

Legionnaires who retire honorably and in good standing receive one year’s pay and a small tract of land in the kingdom of their choice. Retirement is hard to come by, both because of the deadliness of these soldiers’ careers and their devotion, which keeps many from seeking retirement even when they have physically passed the point of being functional as a soldier.