Tannaluvian Spacelift Ships (TSS)—colloquially referred to as “Celestial Schooners” by some humans on Chaldea—comprise an ancient fleet of mystical spacefaring vessels, owned and operated by Tannaluvians, a humanoid species of star voyagers from the Celestial Age. These vessels can traverse the vacuum of space, soar across the firmament of galactic worlds, pierce dimensions and planes, and move virtually anywhere in the universe. Celestial Schooners are the ultimate amphibious vessel, sailing equally well across air, water, land, or any other elemental substance. Some localized myths suggest they can treat psionics as an element, allegedly granting Schooners limited mind-traveling abilities.

What makes these remarkable ships so versatile is their unique propulsion: forms of psionic levitation and telekinesis combined with folding the fabric of space and planar dimensions. The source of this psionic propulsion lies at the heart and inside the belly of each ship—made possible by imprisoned cosmic creatures and void entities—of which no two are the same. Typically, these creatures are Cthulhuian in origin but not always so. While on Chaldea, Cthulhuians are the most renowned and feared of the cosmic species; there are untold thousands, if not millions, of cosmic life forms spanning the breadth of the Pearl Universe. Many of them see Chaldea as a berth, a home, or a casualty.

Shipwrights begin with a captured and enslaved psionic creature, which they use as a template for their operational goals. From there, they build the ship’s superstructure around the behemoth to resemble exo-skeleton body armor. And just as no two creatures are of the exact same size and physicality, so too is each ship unique in its appearance and function. Ships’ core creatures are most often hidden deep within the belly of the ship while select body parts (primarily tentacles, extremities, and sensory organs) protrude from the rear or along the length of the hull. These bizarre-looking craft are half Tannaluvian construct and half living Cthulhuian horror. To terrified observers, it is unclear who or what controls its actions or even its sentience.

Each ship requires a strong psionic telepath (usually Tannaluvian or Taxian) to act as the ship’s navigator, one permanently linked to the entity in order to communicate with it and provide command instructions. Wherever the creature goes, so goes the ship encasing it. At all times, however, the linked horror is searching for weaknesses, for a mental opening that will allow it to decimate its controller and ravage the crew.

Even the strongest, most resilient telepaths eventually lose their minds to insanity as a result of prolonged exposure to the twisted intellect of a Cthulhuian entity. To guard against this, most ships have had dozens of navigators rotate in and out, and the oldest ships have frequently had hundreds. Specialists on board are placed as constant observers to watch the telepaths for signs of mental instability—the entities often try to secret their success from these specialists, and so it becomes an ongoing game of cat-and-mouse with the telepaths both the bait and the prey.

These precious ships are irreplaceable; to lose even one is a terrible unrecoverable loss. They were built by Tannaluvian shipwrights more than ten thousand years ago at the dawn of the Celestial Age; the secrets to building them is believed to be a lost art form, consumed by the singularity of destruction that devours paradigms of thoughts and ideas. Worse yet, a rare few ships are not lost—they were conquered by the nightmarish entities that once served them. Their whereabouts are only known after the fact—when the decimation they leave as a trail is stumbled upon and reported, assuming the ones who discover what the Cthuluians leave behind can retain their sanity afterward.

The core ships of the fleet come in three basic sizes: small, medium, and large. They range from small sloops and frigates to bulk galleons and mighty cruisers, culminating in gargantuan capital ships. But as ship silhouettes and overall design and scale reflect the creature inside, ships have been fabricated in almost any size from micro one-person racers to truly titanic gestalt-class carriers.

The Tannaluvian Spacing Guild has historically been open and unbiased with those who hire their services. Their guild charter stipulates that no person, species, organization, guild, world, or agency shall be denied access to their core premise: “Worlds at your fingertips, quickly and efficiently.”

The Tannaluvian Spacelift program specializes in bulk transport of dry cargo, people, supplies, troops, weapons, and specialty cargo. Beyond bulk transport, Celestial Command offers military support, replenishing military operations that are underway and enabling them to deploy for long periods of time throughout the universe without having to return to port or home. The Special Warfare program operates vessels for unique military and multi-planar operations.

During its illustrious history, Tannaluvia has vied with other species for galactic supremacy, but ultimately, their ship design—combined with their unique Cthulhian control methods—has made it the most dominant and powerful shipping guild in the universe. Even as the era of magic and gods supersedes the Celestial Age, Tannaluvian shipping remains a class of its own, one that others both wish and fear to replicate. 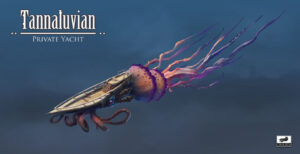 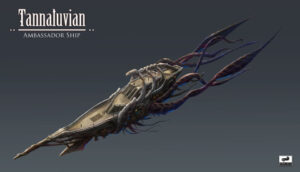 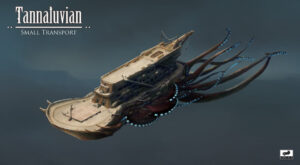 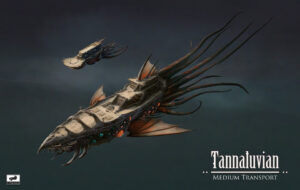 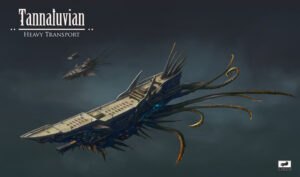 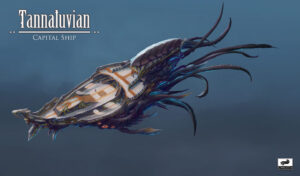