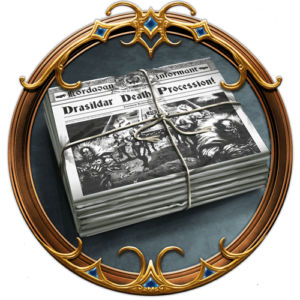 The Kordavan Informant is Chaldea’s newspaper with home offices in Augstat, the capital of Hesse, and bureau offices in Latium, Aimilleuse, Perrin, and Roosh.

The idea of a newspaper is rather novel in Chaldea. There was no such thing as recently as a couple of decades ago, until the Informant’s owner, Otvard Stigvard, came up with an idea about how to repurpose printing presses—a recent invention of the gnomes used to help the Kordavan Empire meet the ballooning paperwork demands of a prosperous, worldwide empire.

After acquiring a press and hiring a gnome to run it, Otvard launched The Augstat Star in Year 22. In the beginning, it wasn’t as much newspaper as gossip column: its focus was scandal, fashion, and announcements about social occasions. Otvard had to hire reporters like Sprecks who were unusually skilled at digging up dirt on others.

But it didn’t take long for the elite of Augstat to become wary of Otvard and his tattling publication. Frustrated about his soiled reputation, his interest was piqued when he heard about Maurko Hamalgrar, a scholar and recent graduate from the University of Perrin, whose doctoral dissertation focused on how journalism could serve a higher purpose: to keep the citizenry informed about important local, regional, and international events. Hamalgrar speculated such a publication could help hold government officials accountable for injustices.

Inspired by Hamalgrar’s writings, Otvard convinced the scholar to put his theories to the test by helping rebuild the Star into something nobler. After convincing Otvard of the need to change the name of the paper as part of the relaunch, Hamalgrar joined Otvard, and thus The Kordavan Informant was born.