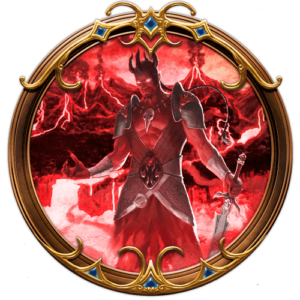 Devils are a species of creatures from the Age of Magic, native to the evil planes of Hell.

Devils are an inherently hierarchical species that slavishly follows a set of codes. It may not always seem this way, but underscoring the actions of all devils is a rigorous set of societal rules, universally understood by devils and rarely violated. This code is what distinguishes devils from demons.

Devils are heartless, lacking any sort of a moral compass—unless you believe their lawfulness counts for something. In fact, devils gain power by feasting, literally and figuratively, on the souls of others, especially those who have a strong moral compass themselves. This drive serves to reward the cruelest and most cunning devils with positions of power, fueling a vicious cycle of pain and agony.

Devils are so strongly anchored to Hell that they can only leave it under specific circumstances. The most common way out of Hell is through the use of magic—perhaps by another devil, perhaps not. Once they leave Hell, devils are often restricted in some way, partially because they are in an alien environment but also because if they were brought out of Hell by magic, that same magic might be used to bind them, control them, or dismiss them. Frequently, the circumstances that brought the devil out of Hell must be maintained or else the devil is immediately returned to Hell.

As devils successfully accumulate power, which is measured by souls and lesser devils under them, they become increasingly dangerous. The most powerful devils in Hell are incredible forces to be reckoned with.