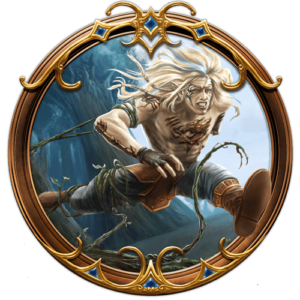 Marners are a group of indigenous peoples from the jungle kingdom of Marn in northern Somarria.

The overarching term “Marner” is a collective designation for any individual originating in the jungle region of Marn that share common lifestyle traits connected to the enigmatic kingdom. Traditionally, Marner collectively refers to elves, but in truth, Marn itself is home to many races and sub-species. Tribes of orcs range into Marn and are considered as much Marn as the elves. All races of Marn share some degree of cultural and linguistic heritage—thus, the phrase “We are Marn.”

The races of Marn are extremely hostile, both inwardly and outwardly. They are described as “being in a constant state of agitation.” So extreme is their animosity that many believe them to be insane. To see a Marner is to invite hostility. While the races of Marn have a supernatural affinity for one another—what they call the “oneness” (see Marn Connection)—the various elven tribes of Marn do not even get along with one another for very long, and any treaties they make only last for the duration of their need, and even these are often violated or ignored.

The elves of Marn do not consider themselves a part of the greater elven community, though those outside of Marn often refer to this as folly, arrogance, and perhaps a result of their secluded and violent natures. It is this claim—and the nature that spawns it—that often has outsiders doubting the very sanity of the elves of Marn.

Marn elves view all races beyond Marn as being “outsiders,” as they literally are those who live outside of Marn and couldn’t possibly begin to understand what it means to live within the arms of Marn. They occasionally barter and trade with outsiders, but it is a rare and shaky occurrence that often ends badly.

Marn elves are distinctive—easily identified by their colorful and aberrant tattoos and grafts, their hairstyles, and their proclivity for exotic body modification.

These grafts and tattoos are beautiful and exotic works of art but are more than personal artistic expression; they produce powerful intoxicants that provide the host with paranormal benefits.

Marn elves have mastered the art of grinding down the various components of their jungle environment to incorporate these elements into elaborate tattoos. Likewise, wood carvers have mastered the ability to transplant living bark onto a living host, where the bark assimilates and augments the host with magical enhancements. The more of these grafts and tattoos an elf has, the higher rank that elf tends to be within his or her particular tribe and the more influence Marn itself has on that elf’s mind and soul. Once an elf starts down the path of using these enhancements, that elf is captured forever and the more the need, and then the more the elf takes, need, take...this increasing power cycle can and does cause instability in those with the highest level of addiction.

These “body enchantments” (as those in the graver communities refer to them) run the gamut from minor enhancements such as requiring less food and water to life-altering expansion of the mind, clairvoyance, life extension, increased endurance, reflexes, and speed, alleviation of the need for sleep, and even increased sexual magnetism. There appears to be no limit to what a Marner can achieve, if one wishes to forfeit physical normality.

Colloquially known the empire over, the “Marner” designation is a pejorative for individuals addicted to Marn substances. The extent of Marn influence on the body and mind is scarcely understood and greatly feared. As such, Marn grafts and tattoos are strictly outlawed and are considered controlled substances in most kingdoms.