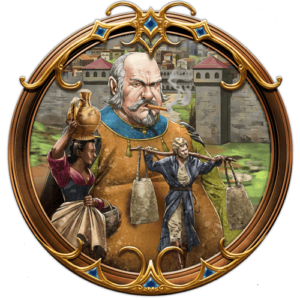 Humans are the dominant lifeform of Chaldea, representing roughly 75 percent of the population.

Humans are not native to Chaldea. They were brought to Chaldea by the dragons during the Claw Hammer War roughly one millennia before Kordaava. These humans came from other worlds as mercenaries to fight the dragons’ enemies, the dwarves. They arrived on Tannaluvian ships from various other worlds in the Pearl Universe.

Once the war was over, the dragons refused to pay the Tannaluvians the money needed to send the armies home, so the humans settled in Chaldea. Over time, various human groups found other groups from the same world and congregated with one other to form kingdoms modeled after their ancestral worlds. They brought with them their gods, their customs, their architecture, their fashion, and their culture.

A defining trait of humans that separates them from all other races is faith and their worship of primal deities.

The Ancestral Worlds and Deities of Humans

Once the dragons lost interest in warring against the dwarves, it didn’t take long for the humans and orcs to begin warring against each other. Within a hundred years or so, human intelligence and the ability to cooperate won out over hatred and savagery. Orcs withdrew to the more mountains regions and the underground realms vacated by the dwarves when they dug even deeper. And humans became the dominant culture across the surface of Chaldea.

Because they essentially migrated from other worlds, humans of Chaldea did not have to evolve from cave people. When the dragons brought humans to Chaldea, those humans brought with them the technologies, sciences, and social outlooks roughly equivalent to Earth’s humans of the Bronze Age. From the get-go, they were masters of agriculture, stone masonry, calendars, reading and writing (only for the scholarly, of course), paper, pottery, rope, simple ships of oar and sail, knowledge of how to domesticate horses, and basic weapons like swords, spears, and bows. Metalsmithing at the time was limited to copper, tin, and zinc, which were used to create bronze and brass alloys.

So, with the dragons and dwarves gone and the orcs and kobolds marginalized, humans very rapidly settled the known world and began doing what you’d expect humans to do—eating, fucking, building things, killing each other, and then singing about it all.

This continued for some thousand years and is the subject of much scholarly work. This millennium is known as the Dark Times because of the endless cycle of warfare and brutality.

The common tongue of most humans is Kordavan—that’s what it’s called, at least. Yet it’s the same as dwarven. Many cultures have retained the languages of their home worlds, and as one travels to remote villages and wildlands, chances are that humans one encounters will prefer their old tongues and might not even know how to speak Kordavan.

Scroll Up
In the "Age of Internet", cookies are a thing. This is for our age gate check we don't track anything else.Ok