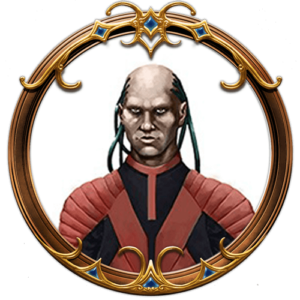 Taxians are a nearly extinct antediluvian species from the celestial age, renowned for their exceptional intellect and highly attuned psionic abilities (supernatural psychic powers of the mind). Taxians have long-been close allies with the Celestial Age Great Old Ones—always together: where there is one, the other is near.

Taxians arrived on Chaldean shores during or around the time of the Claw Hammer War; no one knows for certain. There is no mention of Taxians coming to Chaldea as part of the mercenary armies hired by the Elder dragons. Like rats in the bilge of a merchant ship, it seems likely that when the Tannaluvians landed on Chaldea, they released more than they ever intended.

It is also possible the Taxians were already on Chaldea prior to the Claw Hammer but had not yet let their presence be known. Due to the proximity of the kingdom of Taxia to the Mountains of Chaos, some historians believe they arrived via the Chaos Veil, the titanic rift in the fabric of reality linking Chaldea with other worlds and planes. As with most matters concerning the Taxians, this is pure speculation, and not even the most erstwhile historian would dare ask the Taxians for more details.

Taxians’ basic physiology appears to be human, though depending upon their psychic influence or cult ideology, their bodies are often 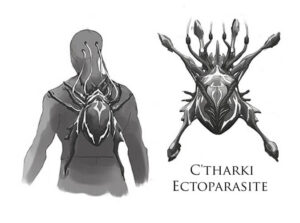 modified or forced to endure supernatural-influenced mutations. Taxians are both male and female, lean of form—almost to the point of emaciation—and, as a rule, have no body hair. Their skin is pale often approaching pure white, giving their facial features sinister, almost undead qualities. Taxians focus their strength on the mind, and as such their bodies are small and fragile.

There are three major cults in Taxia.

The TRADITIONALISTS keep to the old ways, are pure bloods, and are regarded as the strongest mentalists. Of the three cults, the Traditionalists appear the most human, avoiding supernatural augmentation.

TAXIAN MARNERS represent a newer cult within Taxia, one that embraces the allure of Marn—its members augment their bodies with Marn grafts and tattoos.

Those in the cult of TAXIAN DEMONOLOGISTS channel their power from the demonic underworld. Closely allied with demons and netherworld entities, their bodies are abnormally large and physically powerful, usually the result of demonic steroids.

Most Taxians live harmoniously with psionic ectoparasites that attach and/or burrow into a Taxian’s skin, brain, and spinal column, and remain there for decades. Ectoparasites are typically cthulhuian in origin and produce psionic energy the Taxians feed on. These psionic creatures recycle and heighten psionic fluids from the brainstem to the spinal column through clear tubes. These tubes are veins pulled from the same living creature. When a Taxian is under extreme mental duress, these veins have been known to explode, killing the Taxian…but not always the ecotparasites. 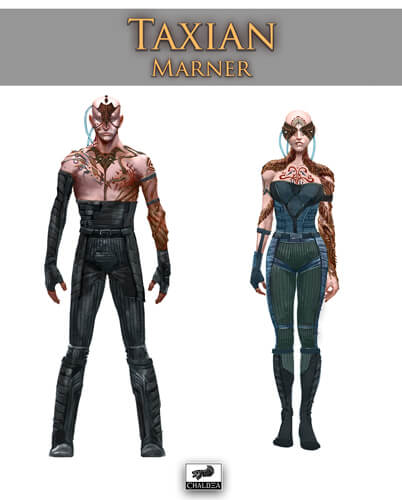