Deities, like chickens, have a pecking order. It’s called divine rank. Divine rank is based partially on how well deities have mastered the use of primal energy and partially by their resources, which will usually but not always correspond to how much base they have.

A brand new, bottom-of-the-heap deity is called a godling. Once godlings have established spheres of influence, they’re called demigods. If a demigod can convince a higher power to provide support, or can control a plane, the correct term is supported demigod. A lesser deity is one who has acquired a home plane. A greater deity has a home plane and at least four more planes. The deity in charge of a pantheon or council is known as the supreme deity of that group. Supreme deities almost always have titles that indicate their affiliation: Odin, Supreme Deity of Asgard, or Set, Supreme Deity of Evil.

With just enough primal energy to keep them going, godlings are the bottom of the pecking order when it comes to deities. Godlings are usually sent by a higher-ranking deity when it comes time to provide visions to worshipers, carry messages to people on hillsides, assist in local jihads, or otherwise putter about in their boss’s cause. Some of the bigger, meaner gods will consider their godlings rather disposable. Most godlings get their status, and the primal energy that goes with the position, but being ascended by a deity of a greater power.

Once godlings get their spheres of influence and generally prove their worth and staying power, they make the rank of demigod. Demigods are sort of bigger and better versions of godlings; things don’t really start to change until the next step.

A supported demigod is a demigod who either has acquired control of a plane or is being supported by a higher-ranking deity. Both of these circumstances increase the amount of primal available. By the time deities reach supported demigod, they’ve probably got entourages of followers. With their new power and their assistants, the newly promoted deities can seriously expand their own religions.

When a deity manages to turn a plane into a home plane, that’s the sign that he or she is now a lesser deity. Usually at this point deities will formally break ties with the divine beings who have been their mentors, and stand on their own as full members of the pantheon.

A greater deity controls at least five planes, including his or her home plane. It’s possible for a lesser deity to be “more powerful” than a greater, but this is unlikely. Once deities have those extra planes feeding them power, they become pretty authoritative.

A supreme deity is a greater deity who leads a pantheon or council. This is something of an elected position; a deity can only become supreme through the efforts of other deities. The exact role that a supreme deity might play will vary from pantheon to pantheon. It can depend, among other things, on what the supreme ones want to do and what the other deities will let them get away with. 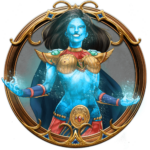